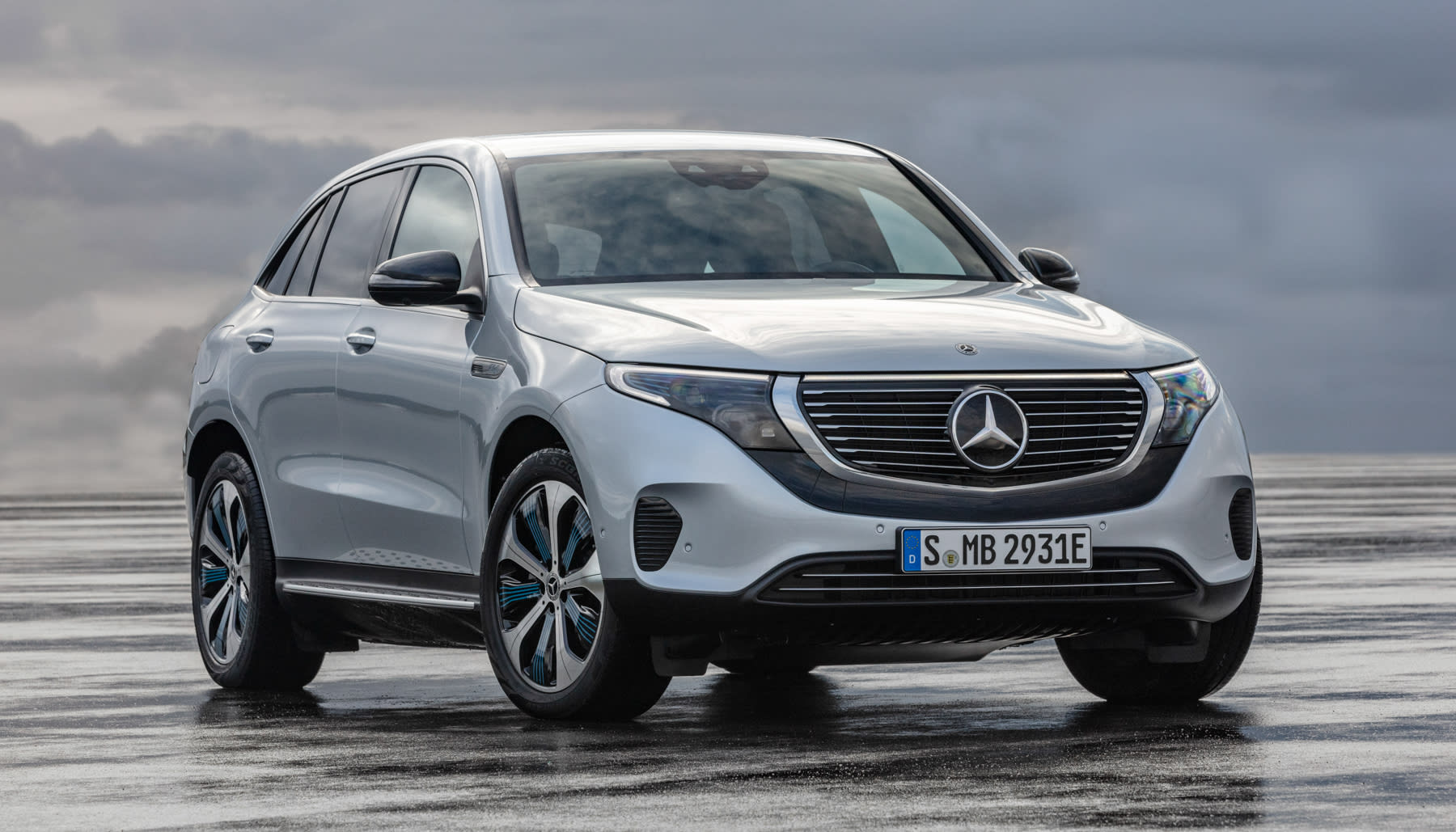 At an event in Sweden Mercedes-Benz took the wraps off its first proper electric vehicle under the EQ brand. The EQC (official name: EQC 400 4Matic) is the automaker's crossover foray into electrified vehicles. With a smooth space-age design, the company calls an "avant-garde electro-look" the EQ is sure to turn heads when it lands on US shores in 2020. 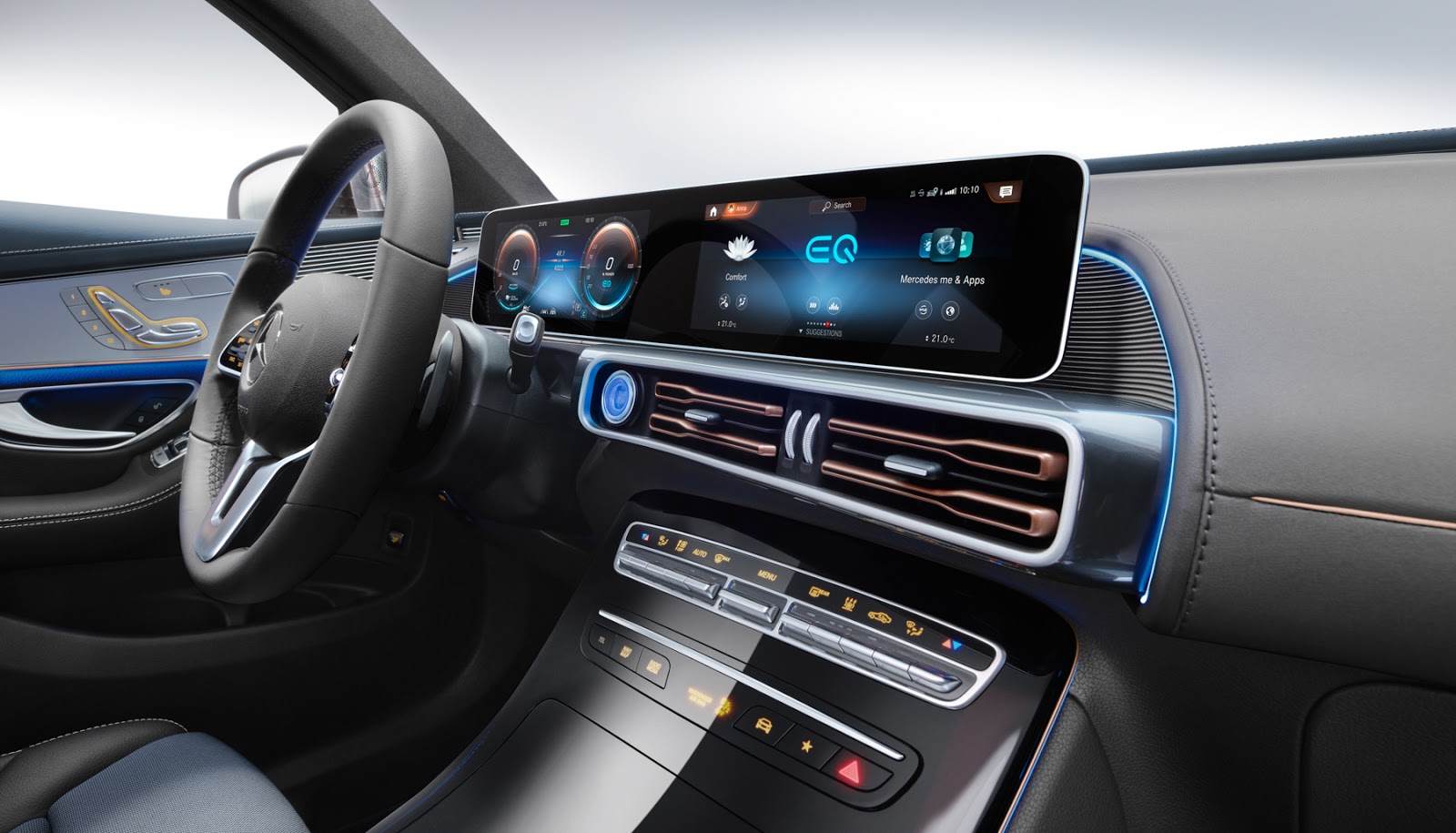 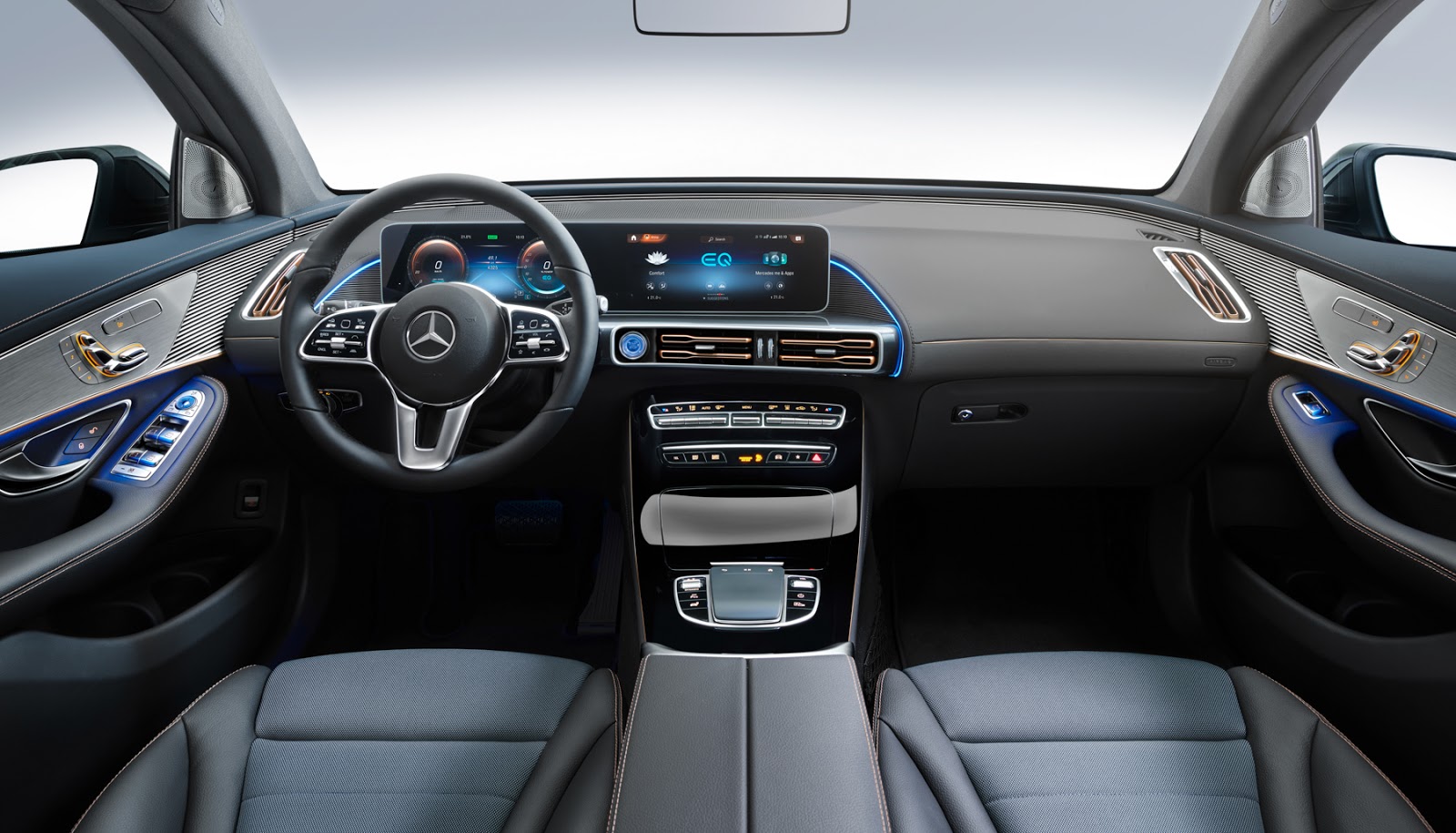 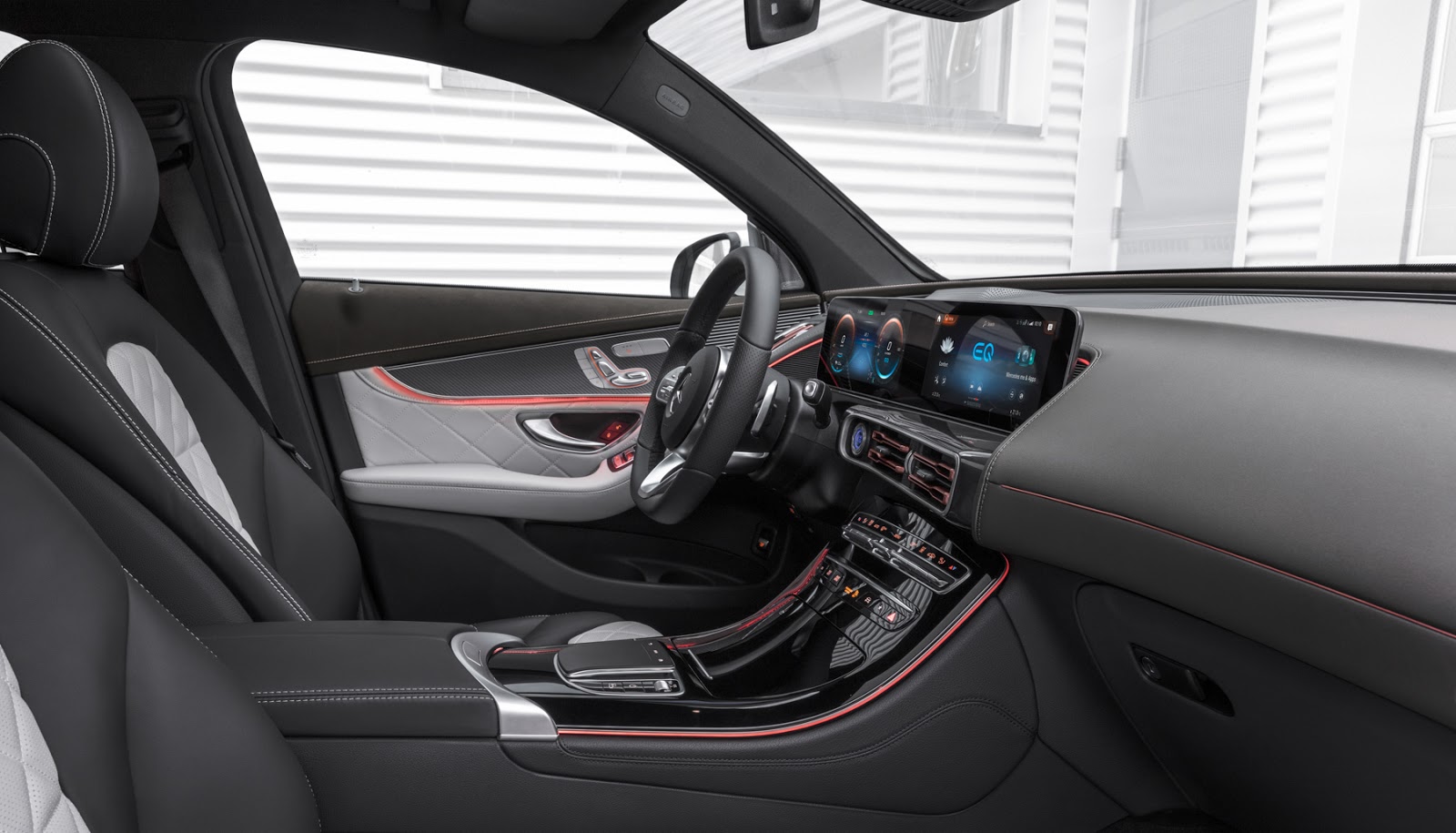 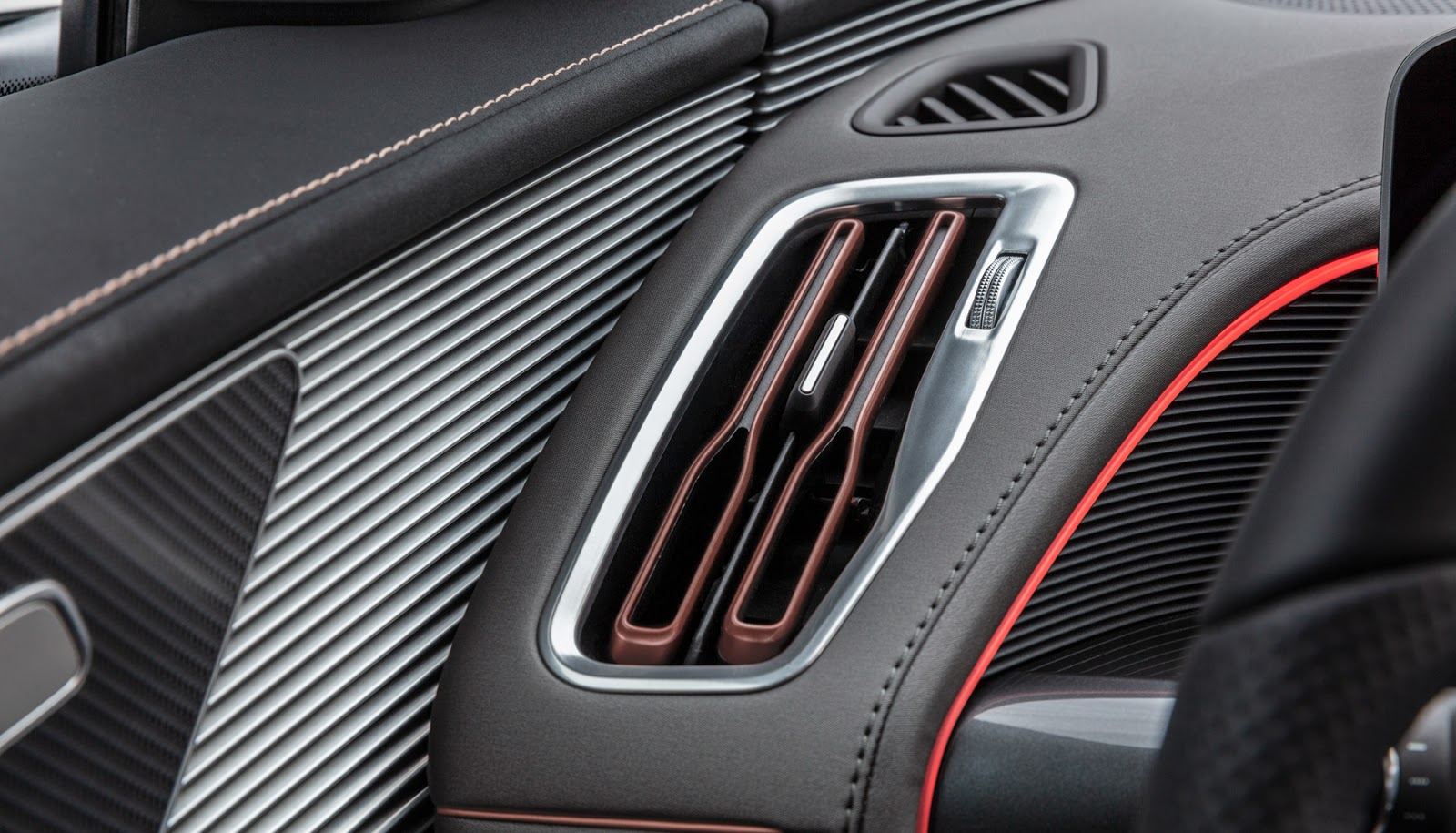 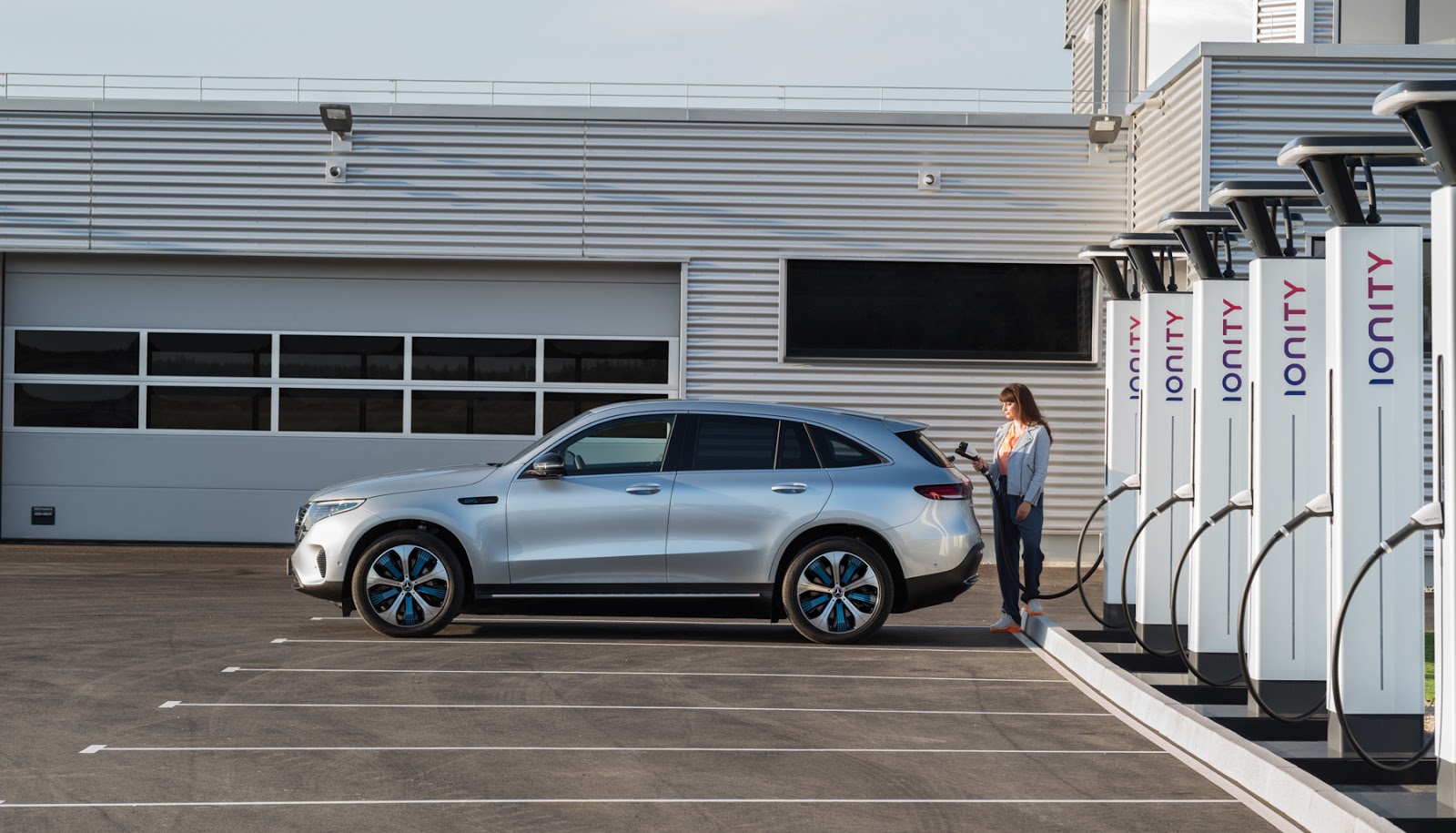 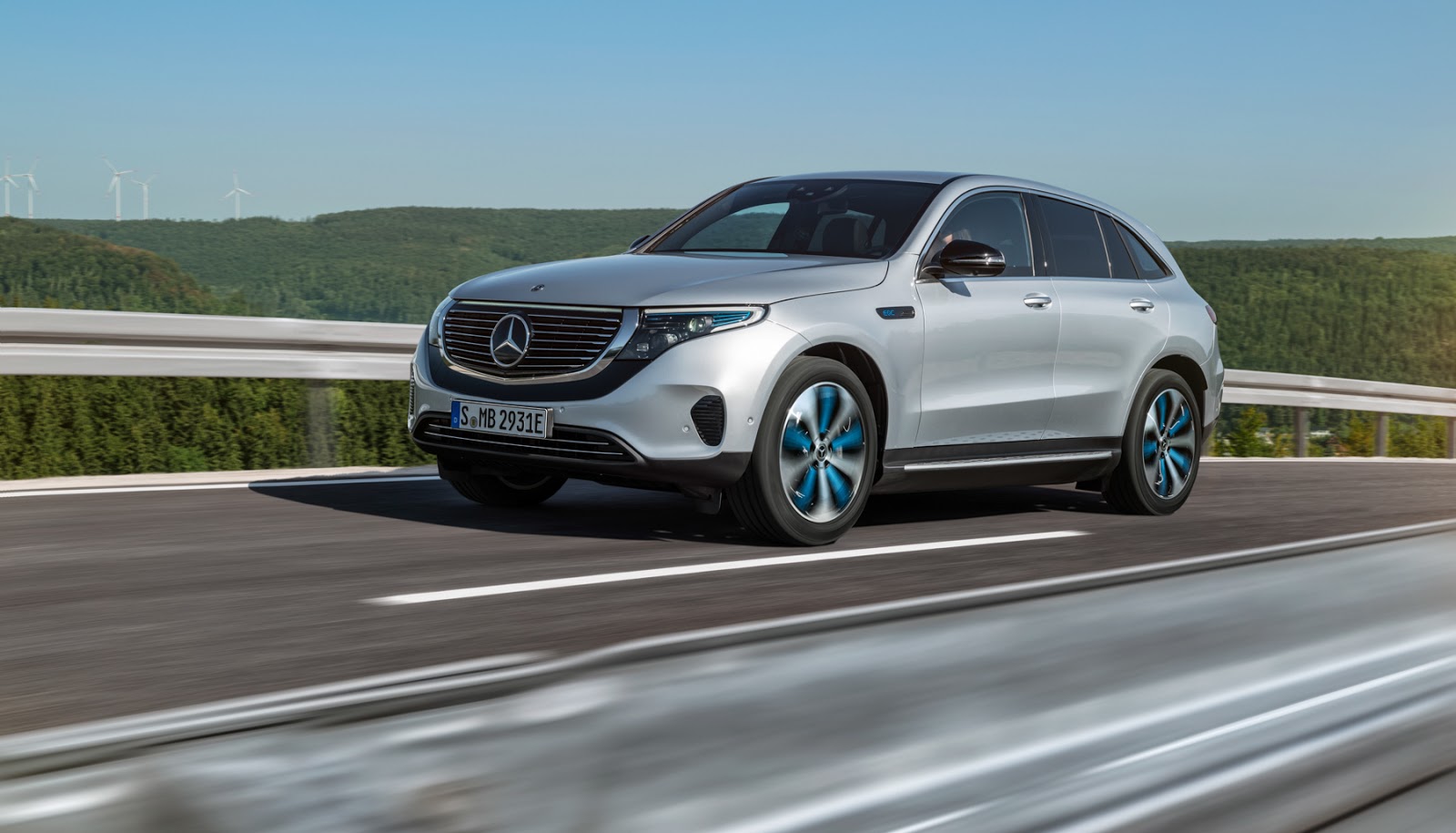 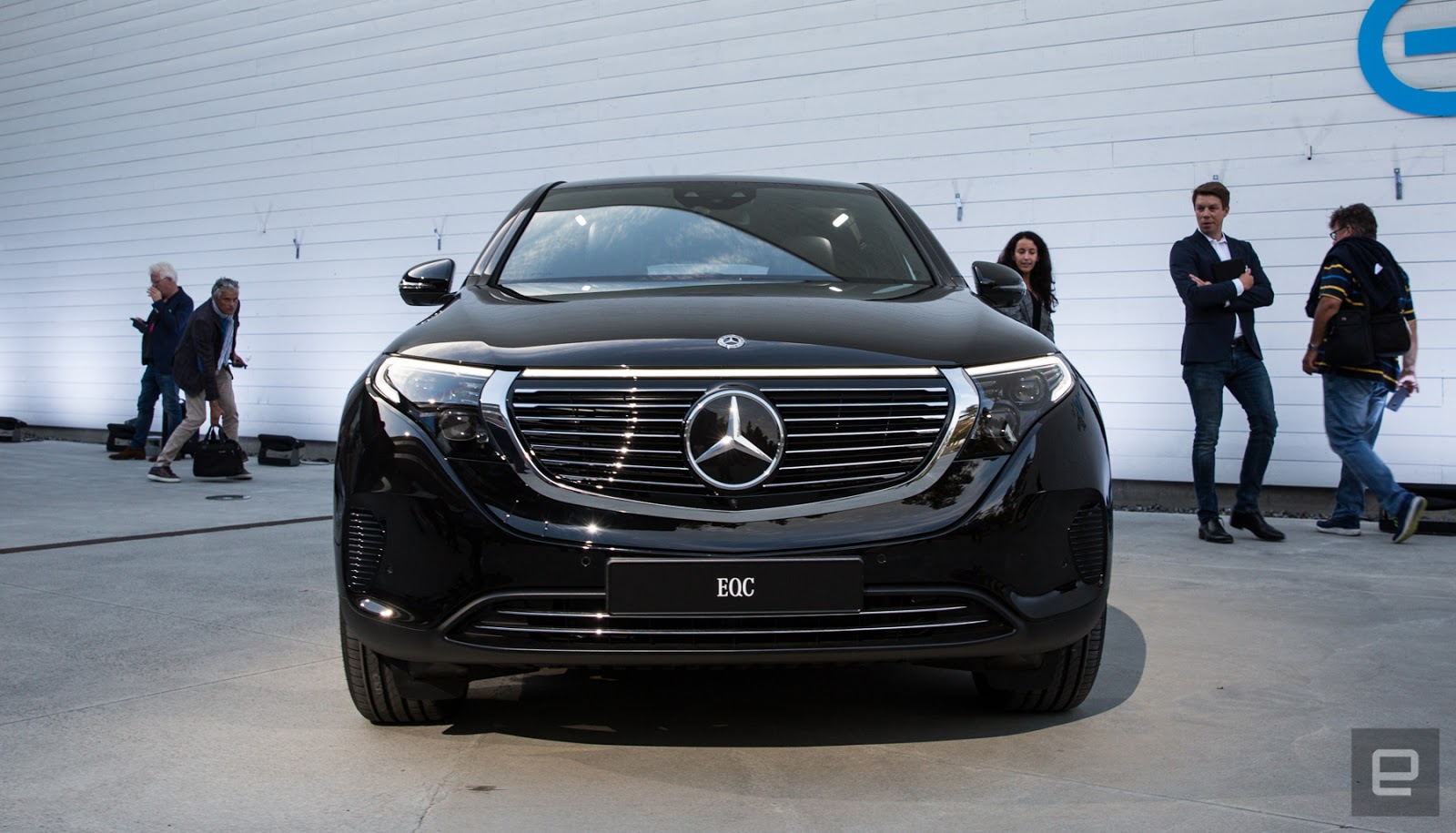 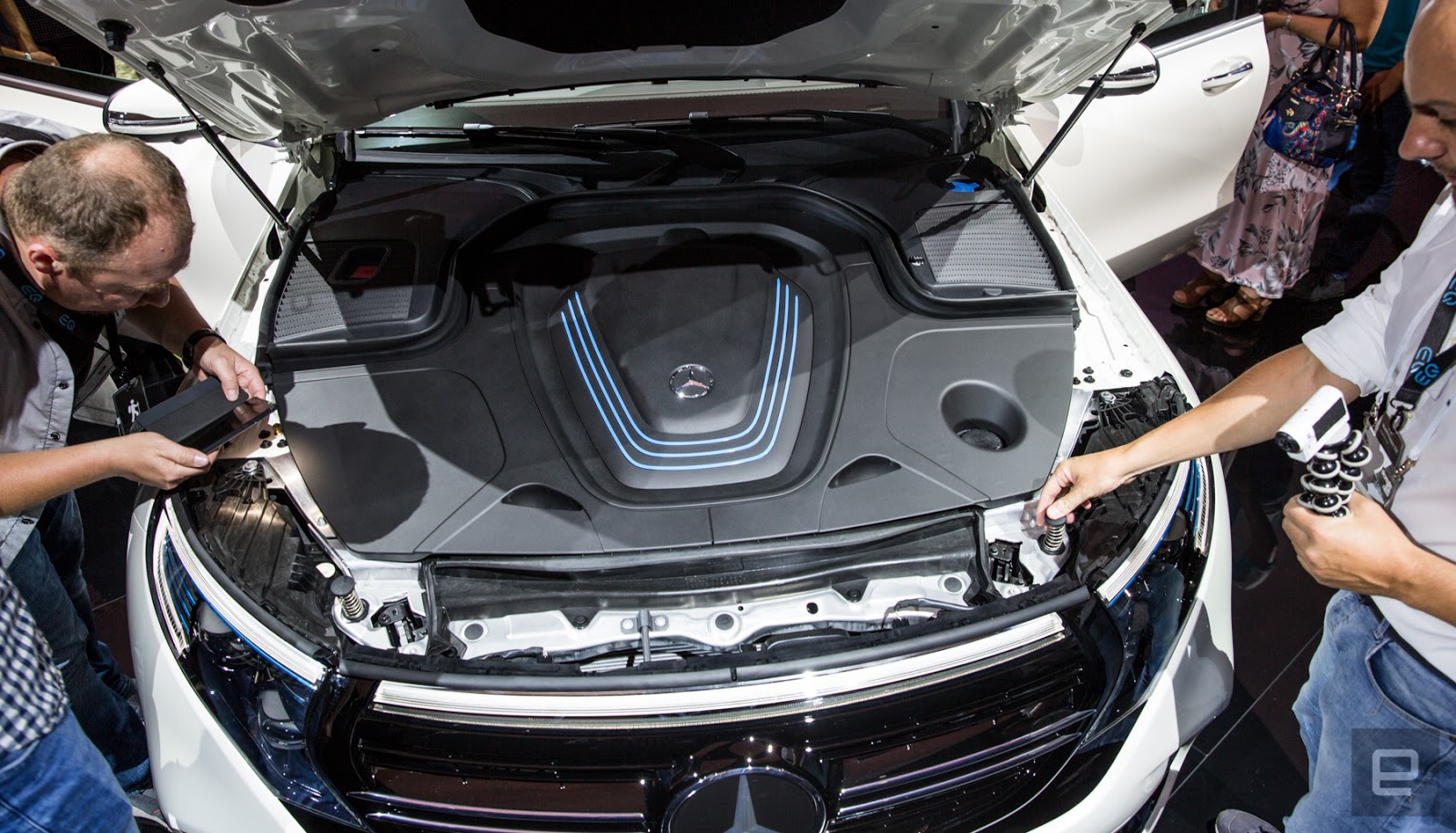 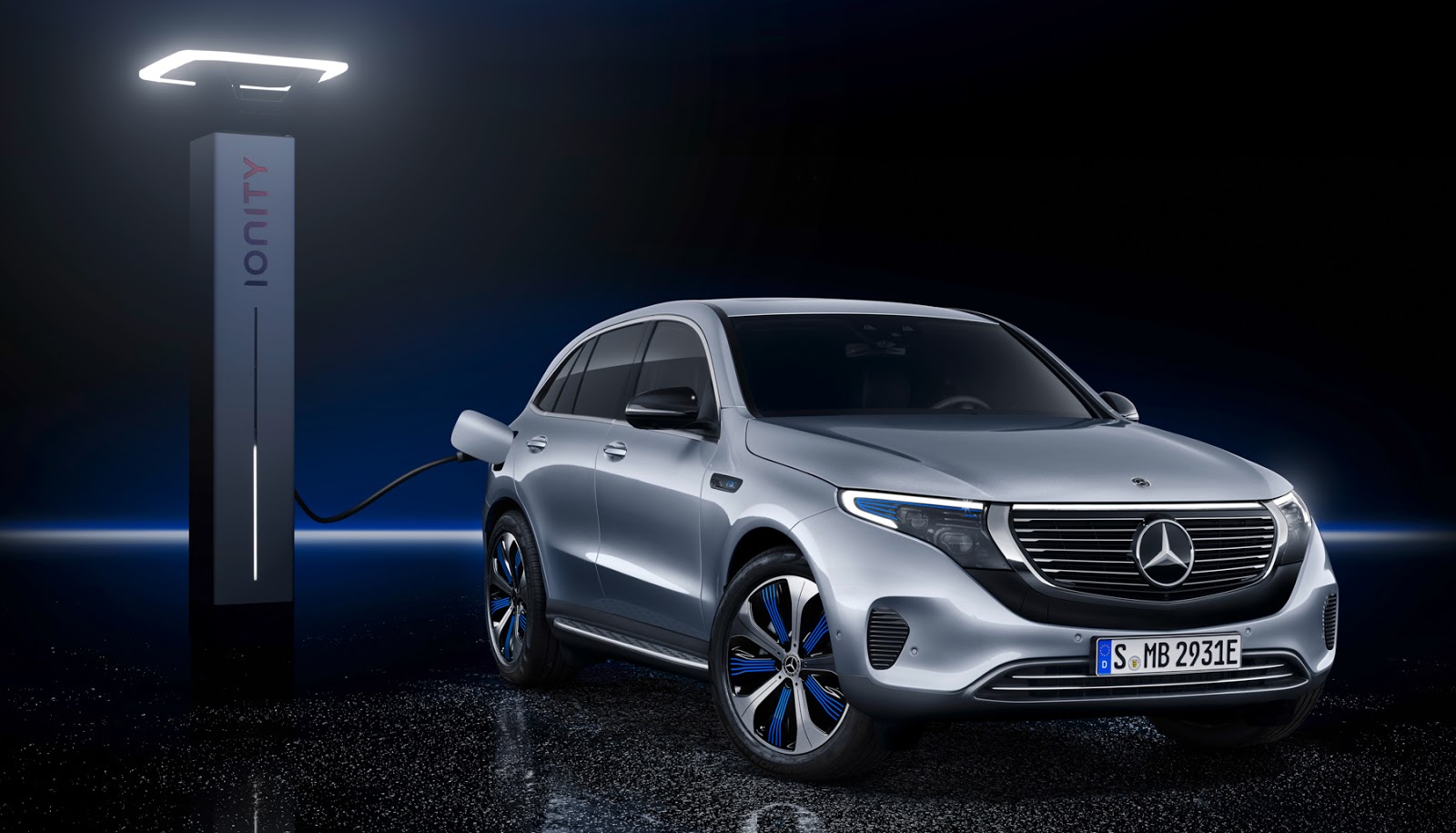 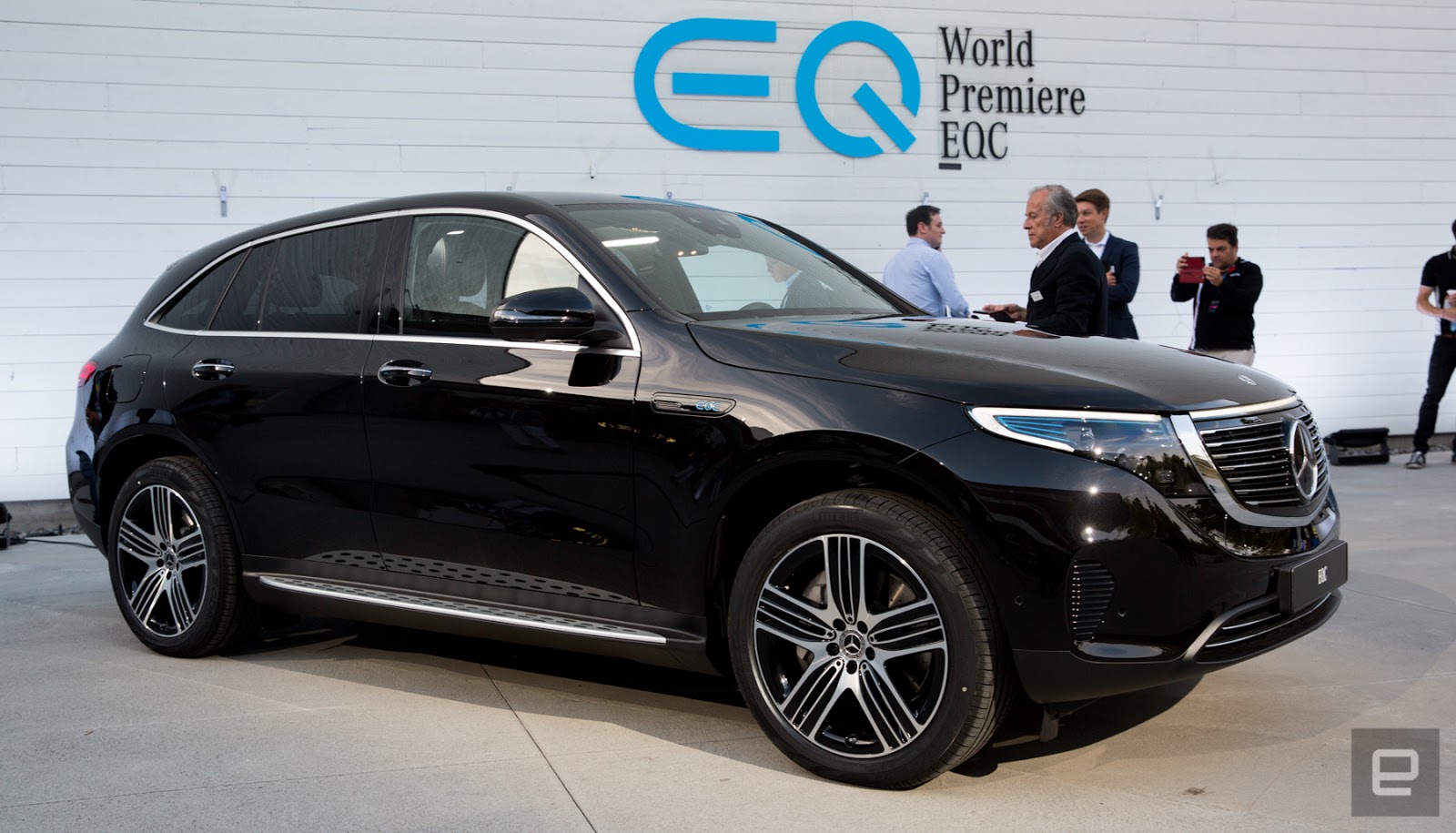 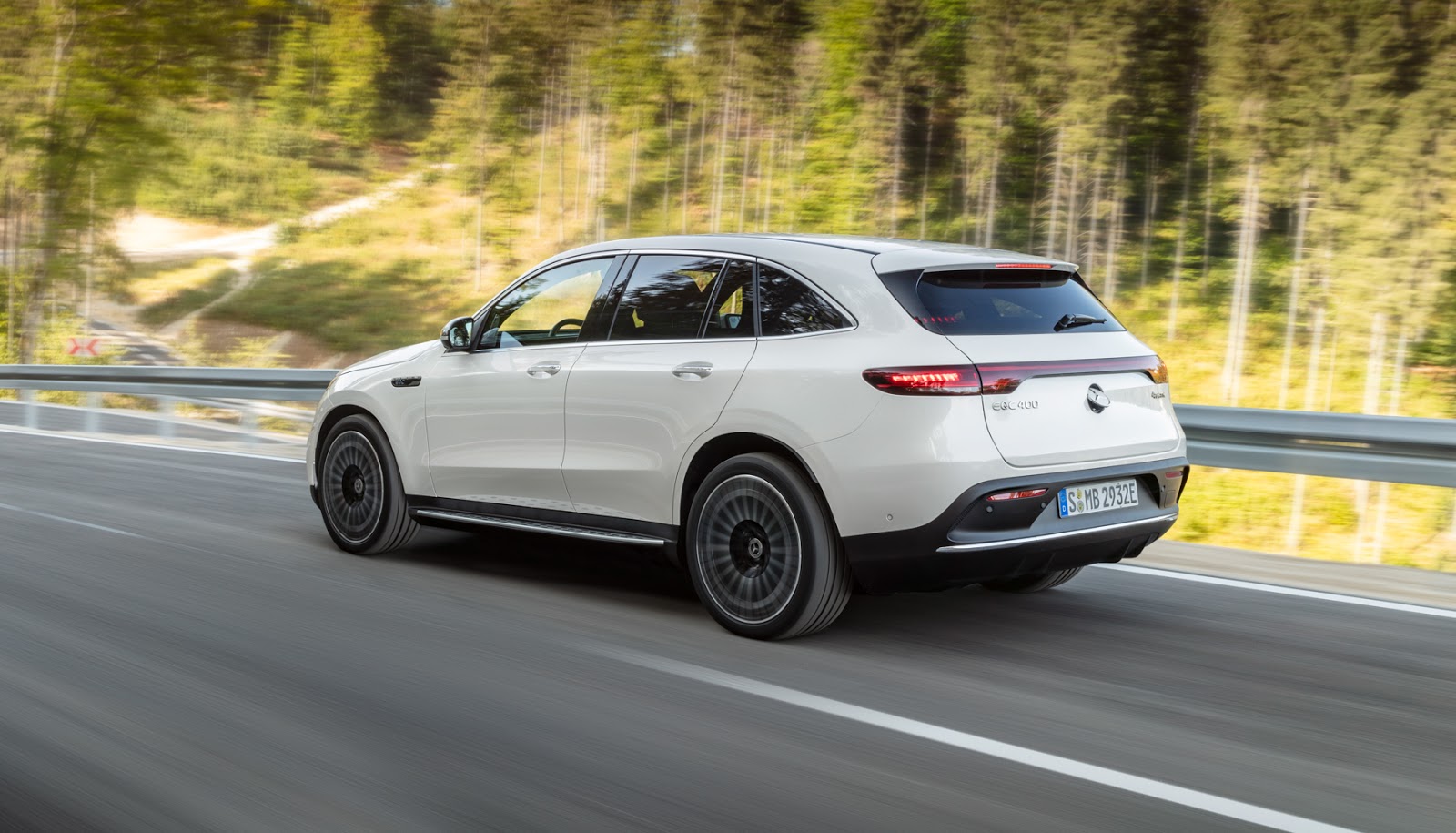 The all-wheel-drive EV uses two motors (one in the front, one in the back) to propel itself, but for the sake of efficiency, each motor is configured differently. When the vehicle is under light and medium load, only the front motor is engaged. The rear motor meanwhile is there for "sportiness." That's something the car will have plenty of thanks to 402 horsepower and 564 foot-pounds of torque.
Mercedes says the EQC can do zero to 60 in 4.9 seconds. So it's no slouch off the line.
It's powered by an 80kWh battery pack running under the floor of the vehicle. The automaker says that car will support DC fast charging and will go from 10 percent to 90 percent in about 40 minutes via a 110 kW power source.
With a range of approximately of 200 miles (see update below), it's not going to unseat offerings from other automakers for how long it can stay on the road before plugging in, but it does deliver on the luxury you would expect from Mercedes.
While the exterior looks a bit like futuristic GLC, the interior goes full future with rose-gold accents and dual10.25-inch displays (one for the instrument cluster, the other for media) behind a single piece of glass that floats ahead of the dash. The doors and dah have "fins" to resemble a high-end amplifier.
If that's not fancy enough for you there will be an AMG interior trim level. No word how much more that'll add to the cost of the vehicle.
As you would expect, the latest Mercedes-Benz tech will be available in the car when it launches. That includes the new MBUX infotainment system with its impressive voice control. The system will have additional features for the EQ line including the ability to find nearby chargers.
It also has ECO Assist which helps create an efficiency map of a route using curves, intersections, traffic circles, gradients, and speed limits to alert the driver on how to drive efficiently. With a combination of light on the dash cluster and haptic feedback on the accelerator, Mercedes says it'll help make drivers more efficient.
Behind the wheel, the latest version of Distronic — the automaker's suite of driver-assistance features — includes slowing a vehicle down while in adaptive cruise control for corners using high-quality mapping and streets signs.
Unfortunately, there's no word on pricing for the electric Mercedes. But it won't be the last EV to come from the automaker. Dieter Zetsche, chairman of Daimler AG and CEO of Mercedes-Benz said that the company will invest 10 billion euros in the EQ portfolio and over a billion in battery production.
Update: According to Mercedes, the 200 mile estimated range figure for the US is "incorrect." Per a spokesperson, "For now, we ask that you please use the 450 km New European Driving Cycle (NEDC) figure (approximately 279 miles). The official U.S. range will be communicated closer to market launch."
Source: engadge

September 11, 2018
The whole point of  Google's Gboard  is to help you find relevant items without leaving your phone's keyboard, but how do you know there's something useful available while you're casually typing away? You might get a clue soon enough.  Android Police  has learned that Google is  testing  a smarter Gboard search feature that changes the distinctive "G" button when there's a relevant GIF, info or sticker search for what you're typing. Punch in "works for me" and you may see a sticker icon, while typing a famous name may show a magnifying glass to indicate that there's an info card. Tap the button and you'll search for the material without having to retype a thing. Google appears to have been testing this Gboard update since July and might not roll out the feature soon (or at all). However, the test recently widened to include more users. If Google likes the feature, it might just be a matter of time before the keyboard
4 comments
Read more

September 25, 2018
The hype surroundin g the hotly-anticipated iOS 12 has simmered down a bit, but only because it's finally been r eleased and people are too busy  tinkering with their iPhones to tweet. (We're guessing.) Unlike the previous iOS updates, tech critics and casual users are  touting iOS 12 as the fastest yet , and get this — even on older phones. Yup, after what seemed like an eternity, it looks to be that the iPhone slowdown fiasco is finally over. This only means that developers can use this moment as an opportunity to ramp up on app development and take advantage of the enhanced speed and feature upgrades of the new operating system. If you want to get in on the frenzy, these training bundles will help you get familiarized with iOS 12 update so you can start writing your own apps: Led by top-rated instructor Rob Percival, this 167-lecture course will guide you through the essentials like Swift 4 and Xcode 10 and help you develop practical skills by letting you build
23 comments
Read more

April 26, 2015
The social network activated its new “Safety Check” service after Saturday’s tragic earthquake. An man walks past damage caused by an earthquake in Kathmandu, Nepal, Saturday, April 25, 2015.   Niranjan Shrestha/AP MATT SCHIAVENZA APR 25, 2015 Four hours after learning about Saturday’s devastating earthquake in Nepal, I received a Facebook notification I had never seen before: Sonia, a journalist friend based in northern India, was “marked safe.” An hour later, the same notification about a different friend popped up. Then another. Soon, several of my friends wrote that they, too, had learned via this strange new notification that their friends in Nepal were okay. A few hours later, the mystery was solved. On Saturday afternoon, Facebook CEO Mark Zuckerberg announced on his timeline that the notifications  came from Safety Check , a service the company launched last fall. “When disasters happen, people need to know their loved ones are safe,” he  wrote , “It
1 comment
Read more