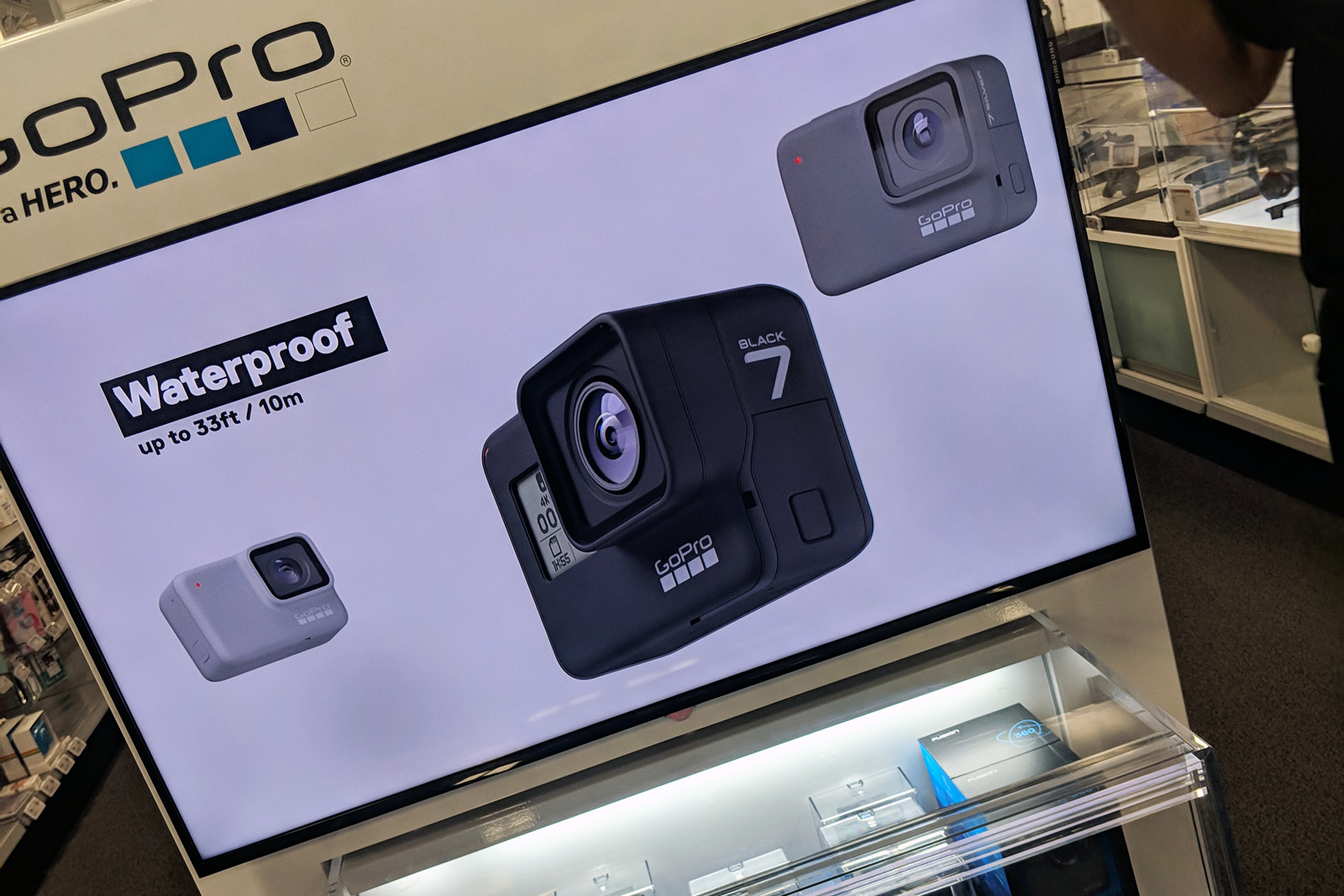 'Tis the season for major device leaks, it seems. Austin Mittelstadt has posted photos of a store display that spills the beans on GoPro's unannounced Hero 7 action cameras. The leak shows a cam that looks similar to the Hero 6 on the surface, but promises "gimbal-like" image stabilization that's smoother than what you get with its soon-to-be-outdated precursor. There's also a hint at a shakeup in product strategy, for that matter.
Where the current Hero range is split more along generational lines (Hero, Hero 5 Black and Hero 6 Black), there would be three Hero 7 variants: Black, Silver and White. It's not clear exactly what would distinguish the three from each, although the Black would be the only one with a front-facing display.
GoPro is believed to be introducing the Hero 7 line sometime later in September. If so, it's coming just in time. GoPro has been trying to turn around its ailing fortunes by scaling back its business and exploring alternative revenue sources, but its success ultimately revolves around strong action cam sales. The Hero 7 may be vital to keeping people interested at a time when many people are content to shoot video with their drones and smartphones.
Source: Austin Mittelstadt (Imgur)

September 11, 2018
The whole point of  Google's Gboard  is to help you find relevant items without leaving your phone's keyboard, but how do you know there's something useful available while you're casually typing away? You might get a clue soon enough.  Android Police  has learned that Google is  testing  a smarter Gboard search feature that changes the distinctive "G" button when there's a relevant GIF, info or sticker search for what you're typing. Punch in "works for me" and you may see a sticker icon, while typing a famous name may show a magnifying glass to indicate that there's an info card. Tap the button and you'll search for the material without having to retype a thing. Google appears to have been testing this Gboard update since July and might not roll out the feature soon (or at all). However, the test recently widened to include more users. If Google likes the feature, it might just be a matter of time before the keyboard
3 comments
Read more

September 25, 2018
The hype surroundin g the hotly-anticipated iOS 12 has simmered down a bit, but only because it's finally been r eleased and people are too busy  tinkering with their iPhones to tweet. (We're guessing.) Unlike the previous iOS updates, tech critics and casual users are  touting iOS 12 as the fastest yet , and get this — even on older phones. Yup, after what seemed like an eternity, it looks to be that the iPhone slowdown fiasco is finally over. This only means that developers can use this moment as an opportunity to ramp up on app development and take advantage of the enhanced speed and feature upgrades of the new operating system. If you want to get in on the frenzy, these training bundles will help you get familiarized with iOS 12 update so you can start writing your own apps: Led by top-rated instructor Rob Percival, this 167-lecture course will guide you through the essentials like Swift 4 and Xcode 10 and help you develop practical skills by letting you build
19 comments
Read more

September 27, 2018
The LG V40: Three cameras on the back, two on the front. I t's official: LG's upcoming flagship smartphone, the LG V40, has three cameras on the back and two on the front.   Though the official announcement of the phone is due Oct. 3, the company revealed some details about the phone — including photos and a video — on its  Korean website .  Interestingly, although the cameras are featured prominently in all these promo materials, LG hasn't revealed their specs.  What we did find out, though, is the size of the phone's screen: It'll be 6.4 inches. The phone will be the same width as its 6-inch predecessor, the LG V30; the company claims it increased the screen size within the same form factor by reducing the size of the bezels.  The phone will be available in three colors: gray, red, and blue, and we get a glimpse of all three in the promo video (above). LG says it sandblasted the phone's rear glass to achieve a "silky feel," hence a
Post a Comment
Read more